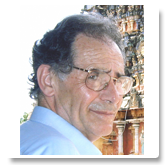 Bruno Dagens is emeritus Professor (since 2003) of the Université Sorbonne nouvelle – Paris 3. He is an eminent historian (especially of art and religions), Sanskritist and archaeologist covering a wide area of research, including Afghanistan, South-India and East-Asia, especially Cambodia and Thailand. For his archaeological research he visited Surkh-Kotal in Afghanistan, was posted in Cambodia in the Centre of the École Française d'Extrême Orient and spent many years in the French Institute of Pondicherry, India. He also held academic posts in the Université Catholique de Louvain, was professor of ancient history and archaeology of South and South East Asia in the Université Sorbonne nouvelle Paris 3. He was also the director of the Unité de formation et de recherche (UFR) of the Orient and the Arabic World and was also responsible for the École doctorale "Oriental Languages, Civilisations and Societies". Having been the treasurer of the IASS until 2012, he is now one of its honorary Vice-Presidents. Numerous publications and critical editions of Sanskrit texts, translations and studies bear witness to his versatile scholarship. Out of his prolific writing mentioned can be made of the edition and translation of Mayamata, an important Sanskrit treatise on housing, architecture and iconography, in several publications between 1970 to 1994. He also investigated the architectural instructions in the Ajitāgama and the Rauravāgama and worked on several critical editions of Śaiva-Āgamas. His monograph Angkor — la forêt de peirre 1989 (French Edition) was published as Angkor, Heart Of An Asian Empire in 1995. Noteworthy is also his work dealing with the Khmer and the Indian Temple: Le Temple indien — Miroir du monde, published in 2009. For the list of his publications see: